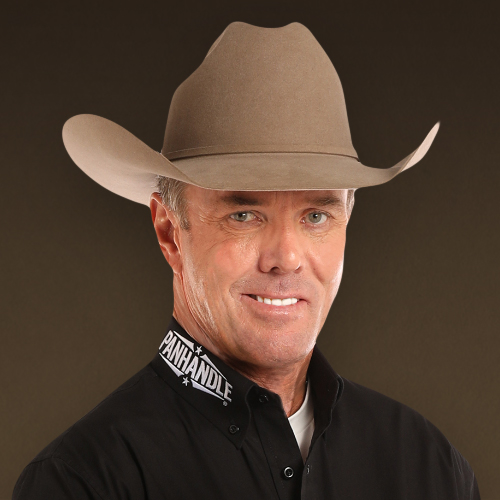 Tuff was born in El Paso, Texas as the youngest of seven children. Although young, Tuff started off with ideas of being a jockey. It was obvious that the cowboy life was his calling, and he began competing in every event there was. Winning first as a teenager, then for his alma mater, Sul Ross State University, Tuff went on to join the Professional Rodeo Cowboys Association in 1983. A year later, he qualified for his first of 12 National Finals Rodeos and proceeded to win three world bull riding championships in 1986, 1989 and 1991. Tuff rode his last NFR bull for the 1991 World Championship in honor of his best friend, Lane Frost, who died in the arena at 25. In 1992 Tuff became the driving force of the formation and development of Professional Bull Riders (PBR). In 1995, he won the PBR World Championship Title. While a career-ending injury in 1998 put his bull riding days behind him, Tuff continues as an iconic figure in the sport. From the helm of Championship Bull Riding, the western lifestyle industry and support of several charities; he carries the torch as the greatest ambassador the sport has ever known. Tuff is an inductee of the Pro Rodeo Hall of Fame, Texas Cowboy Hall of Fame, Texas Rodeo Cowboy Hall of Fame, Bull Riding Hall of Fame and El Paso Athletic Hall of Fame. While Tuff is grateful for his accomplishments he says, “My three boys are my greatest rewards in my life!”